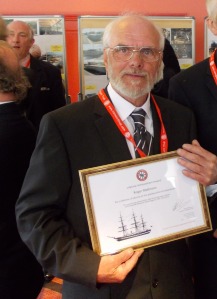 In June, Roger Mallinson travelled in his 1931 Austin Seven to historic Brooklands to receive a Lifetime Achievement award from the Transport Trust. The award, presented by Prince Michael of Kent, was for Roger’s work with historic steam vessels, notably 1906 SL Shamrock.

Shamrock was built by Nathaniel Shepherd of Bowness-on-Windermere for wealthy Manchester textile manufacturer, W M Birtwistle, and run by his boatman, Charles Ashley, who continued operating and maintaining her after Birtwistle’s death. She passed to Ashley’s son, Billy, one of the founders of the Bowness Bay Boating Company, but a period of commercial use led to the loss of her original Sisson of Gloucester triple expansion steam engine and conversion to a motorboat running on TVO. By the time Roger purchased her in 1976, she was dilapidated, but he lovingly restored her to steam and her former glory. When the 2009 floods caused devastating damage to Shamrock’s highly complex clerestory coach roof, Roger was faced – yet again – with the prospect of a major restoration programme. The Shamrock Trust was formed, with a view to ensuring Shamrock’s long-term future.

Many people have enjoyed the privilege of a trip on Shamrock or a chat with Roger – who willingly shares his knowledge of historic Windermere vessels. Less visibly, we also benefit enormously in the workshop from his engineering expertise, which has enabled us to restore Osprey’s highly significant historic engine for operational use and to develop engineering operation and maintenance programmes for collection vessels. His energy and passion for understanding and making things work, preserving historic material and passing on knowledge and skills really does inspire all of us.

Roger has also been awarded this year’s Marsh Volunteer Award for Historic Vessel Conservation in partnership with National Historic Ships.

We were thrilled to announce in July that we have been successful in our bid for £9.4 million from the Heritage Lottery Fund. This news, coupled with receiving planning permission from the Lake District National Park in June means the project to create fantastic new museum facilities can now be delivered.

Lakeland Arts has raised an enormous £3 million in match funding over the last two years and now only needs a further £300,000 to reach the final target. The support for the project has been overwhelming and we were pleased to be able to thank many of our supporters on an evening cruise around Windermere on MV Swan, courtesy of Windermere Lake Cruises.

We also launched our One Million for the Museum Endowment campaign to raise £500,000 by 2016. For more information on how to give visit the website. 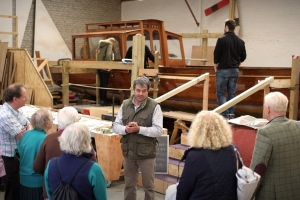 What better way to celebrate the successes of the project than taking part in the Heritage Open Day scheme and welcoming hundreds of visitors to the Museum to get a taster of the future.

This was our fourth Heritage Open Day and it’s proving to be the most popular and exciting opportunity to visit the collection and meet the team. The site was buzzing with activity and the sights, sounds and smells of historic launches. The conservation team was on hand to provide an insight into the complex conservation work taking place and the specialist skills required to look after such an important collection of historic vessels.

There were guided tours of the collection with the Curator, delving into the themes and stories that will be brought to life in the exhibitions and displays in the new Museum. A behind the scenes peek into archival material, including historic photographs and small objects, also gave visitors the opportunity to share their own memories and experiences on the lake.

One of the many highlights of the day was the chance to take a trip on an historic steam launch; SL Shamrock and SL Mosquito visited the museum for the day taking nearly 100 visitors for a special trip on the lake in the glorious September sun. Visitors of all ages enjoyed the activities on offer and we look forward to welcoming them back to the new Museum now the project is moving full steam ahead.

To find out about the next opportunity to visit, see our website. 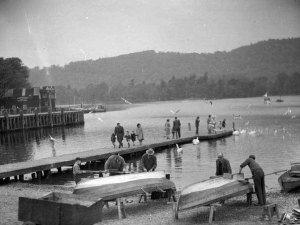 As we continue to digitise our collection of glass plates, we are always intrigued to find the stories behind the photographs.

We were delighted recently to hear from the daughter of Jim Tebay who contacted us to tell us all about a photograph of men at work on boats at Bowness Bay. As well as identifying her father she also revealed all the names of the other men and that the photograph was taken in 1954. It shows members of the Tebay family who were involved with rowing boat hire at a time when it was a seasonal business. She recalled that in those days boats would be stored for the winter in the Old Laundry in Bowness, now the World of Beatrix Potter.

A family that we would like to find out more about are the Warburtons from Manchester who lived at Cragwood. In August 1898 W. Warburton commissioned Shepherds to build a 36’ electric launch named Swallow at a cost of £122.10s.0d. A photograph of this elegant boat, gives us a tantalising glimpse of her illusive owners. These early electric launches had relatively short lives as battery acid would eat into the wooden hulls. When Shepherds took on the commission for the Warburtons’ next boat, they opted for steam power, and the result was Swallow, the 1911 steamer in our collection.

If you have any information that would aid our research on the Warburtons or other individuals who have a connection with Windermere boats then we would love to hear from you.

It is only a few months since we got the great news about securing the funding for the Museum, and already we are recruiting volunteers to help with the mammoth amount of awnings, fringing, parasols, boat covers that need making.

Over the next few months we want to establish a Sewing Group at the museum to help out with a variety of jobs that will help the project team enormously. This group will become an integral part of the museum, before, during and after the museum opens as work will always need the care and attention of this group.

If you can’t get to Bowness, don’t worry, there will be opportunities to get involved to make sure all those than can, sew! A small description of the type of work need is below.

Starting with covers for the collection

Our collection contains extremely significant vessels and objects with fragile surfaces which need protection from dust and dirt. We have started making lightweight breathable covers for our most vulnerable items – from fragile little models to full size vessels. It’s easier than it sounds and provides essential protection and a great sense of achievement! Once the collection is all covered and safe, further projects will include creating children’s costumes, cushion covers for boats and much more

Please contact Ian Read, Head of Learning for more information about dates when the group meets.

Our series of “Talking About…” events earlier this year was a great success. We would like to thank everyone who brought us information, objects and photographs, helped us make connections or found time to talk. The material from research, conversations and hours spent in our stores will enable us to enrich our interpretation plan with accurate information, stories of real people and fantastic displays.

Film is proving to be a particularly valuable resource. For example we have been given fascinating footage of vessels being built, launched and sailed on Windermere during the 1950s – and had the privilege of hearing first-hand what that involved. Archival material relating to local businesses has reinforced our understanding of the role that Windermere played both nationally and internationally –  whether it’s information about the export of Windermere vessels by local boatbuilders, Anchorage Ltd, or photographs and brochures that record the development of Mallinson’s Motor Tours as they catered for visiting tourists

Early advertising material perfectly illustrates the transition of lakeside houses from indulgent private homes to luxury hotels. This elaborate advertisement for the Belsfield, one of the very first places in Windermere to boast electricity, says it all.

It was particularly moving to receive on loan the diving suit and equipment used by Bernard Frazer, a member of the 1962 team that salvaged SL Dolly from Ullswater, and to have the chance to read extracts from his dive diaries and talk to his family. These personal connections bring our collection to life.

What better location can there be for inspiring the next generation of engineers, artists, writers, mathematicians and architects than here? This is an inspiring project and we want young people to be at the heart of what we are doing. There will be no closed off fences stopping pupils from coming in, only an open door policy to encourage ideas, creativity and endless possibility.

We are asking teachers to get in touch so that we can work together on creating a meaningful programme of activity. We want to provide the future generations with activities and engagement that will motivate their own learning and create a sense of achievement – but we need teachers and pupils to help create this legacy. There will be opportunities for pupils to come on hard hat visits, work with the team creating audio visuals, watch the collection come back to life, learn boat building skills and test them out on the water! We want all of this to help shape what we offer once the doors are open to the public.

So, contact us, visit the site, meet the team and discuss how we can shape the Museum to fit the teaching that happens in schools. If you are interested please get in touch with Ian Read, Head of Learning, to discuss the possibilities.